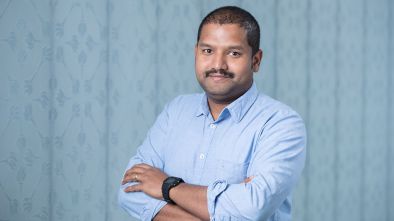 Dr. Raj was born in Kerala, India in 1984. After obtaining his Bachelor’s degree in Polymer Engineering (2006) from the Mahatma Gandhi University, he moved to the European University of Brittany, France to pursue his Master’s (2007) and PhD (2010) in biocomposite materials in the group of Professor Yves Grohens. He then moved to the Universite Catholique de Louvain (UCL, Belgium) as a Postdoctoral Researcher (2011-2013) in the group of Professor Eric Gaigneaux, where he worked on organic-inorganic hybrid catalysts. He was a Research Engineer (2014-2015) in the group of Professor Frederic Chandezon at the Atomic and Alternative Energies Commission (CEA) in Grenoble, France where he worked on sheathing semi-conducting polymer nanowires for applications in Organic Field Effect Transistors (OFET). His present research interests are in applying surface chemistry for solving engineering problems, and Scanning Probe Microscopy (SPM/AFM) to probe material properties at the nanometer scale.(Credit photo: NYU Abu Dhabi www.nyuad.nyu.edu)

Figure 1: AFM phase images capturing the real time trans-to-cischemical transitions on the surface of an azobenzene single crystal up on UV irradiation.

inaccessible with classical diffraction methods, and their surface properties cannot readily be established with the wetting (water contact angle) method. Here we demonstrate that Atomic Force Microscopy (AFM) can be employed to determine the distribution of surface energy in the transand cisdomains on the surface of an azobenzene single crystal with high spatial resolution. UV-excitation of single crystals of 3′,4′-dimethyl-4-(dimethylamino)azobenzene results in domino-like trans-to-cis isomerization that in the AFM phase channel affords contrasting domains with different viscoelastic and adhesion properties. The Hamaker constant of the cis domains (~1×10‒19 J) is higher than that of the transdomais (~7×10‒20J). The surface energy of the domains calculated from the Hamaker constant is ~40% higher after UV irradiation. The results show that the AFM-based surface-sensitive techniques are a powerful tool to probe the dynamic changes in the surface viscoelastic properties upon photoinduced isomerization of molecular switches.

In the second part of the talk the propensity for adherence to solid surfaces of asphaltenes, a complex solubility class of heteropolycyclic heavy aromatic compounds from the heavy fraction of crude oil, is presented. Asphaltene scale deposition though remains an intractable problem in petroleum industry, they are nonetheless intriguing class of compounds forming nano clusters using π— π interactions. While asphaltenes form smooth continuous films on all substrates at higher concentrations, they deposit as individual nanoparticles at lower concentrations. The size, shape and spatial distribution of the nanoaggregates are strongly affected by the nature of the substrate: while uniformly distributed spherical particles are formed on highly polar and hydrophilic (mica) substrates, irregular islands and thicker patches are observed with substrates of lower polarity (silica and calcite). Asphaltene nanoparticles flatten when adsorbed on highly oriented pyrolytic graphite due to π— π interactions with the polycyclic core. Force-distance profiles provide direct evidence to of the conformational changes of asphaltene molecules on hydrophilic/hydrophobic substrates that result in dramatic changes in adhesion and mechanical properties of asphaltene deposits.

View all posts by admin →